Dent, 33 Cockspur Street, London, N° 32573, commissioned in Switzerland to Capt & C°, from Solliat, made by Leon Aubert in 1904. Extremely important 18k gold double face highly complicated keyless astronomical minute repeating, "grande and petite sonnerie" clock watch with perpetual calendar, equation of time, signs of the zodiac, sunrise and sunset, morning star and evening star, moonrise and moonset, phases and age of the moon with apparition of the Great Bear at the black moon, every second re-volution only. 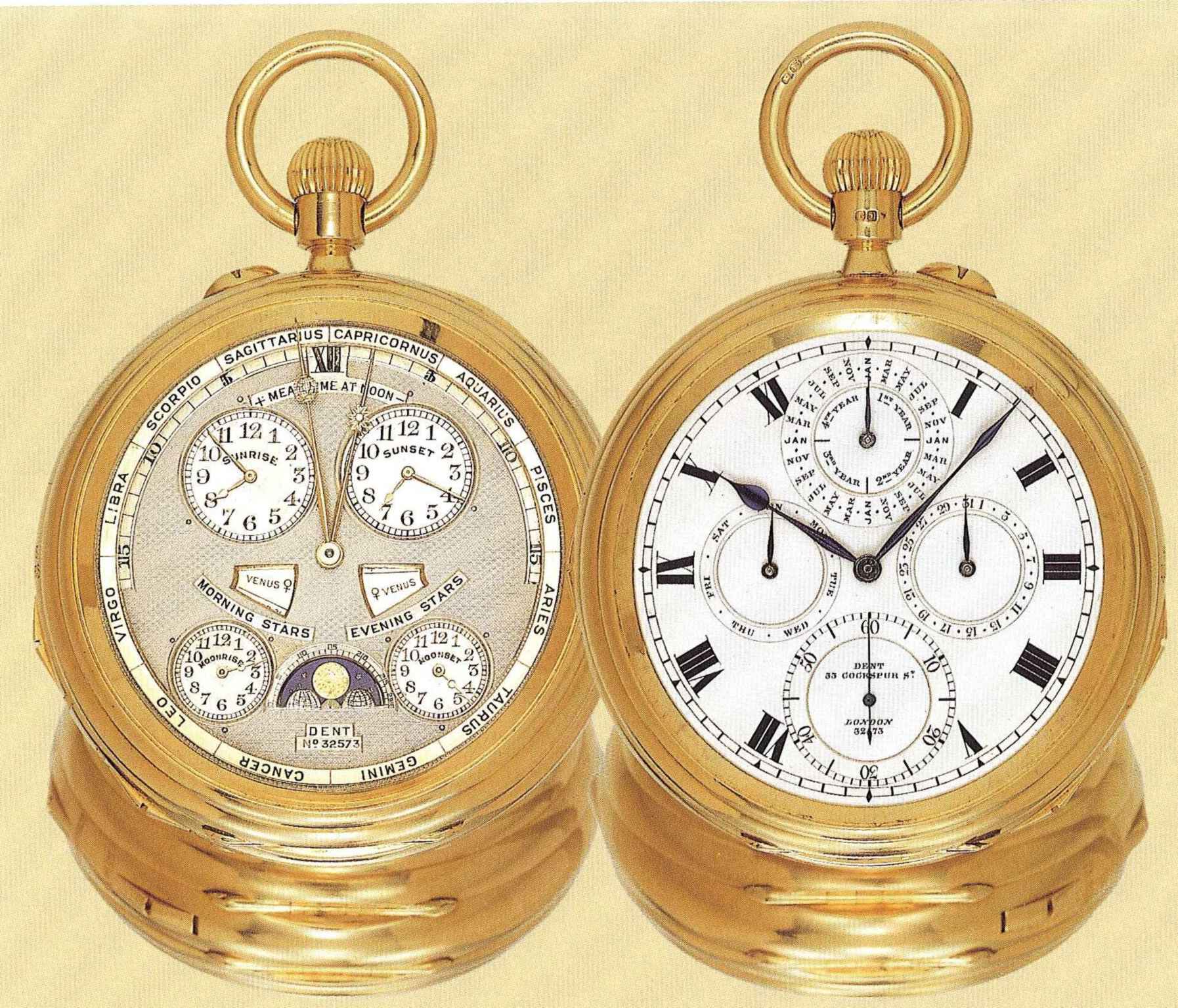 Three body massive "pomme et filets" polished case, glazed on both sides. White enamel dial, signed Willis, on the front face, with Roman numerals, subsidiary dials for the days of the week, the months for the four years of the leap year cycle, the dates and the seconds. Silver engine turned dial on the rear face, with outer gold zodiac ring, inner semi-circular equation of time sector, subsidiary small dials for hours and minutes of the sun-rise, the sunset; the moonrise, and the moonset, apertures for the morning star and the evening star indications and for the gold enamelled moon phase volvelle al-so bearing the Great Bear, which appears every second revolution only, the age of the moon engraved on the edge. Blued steel " pear" hands on the front face, gold hands on the reverse with a sun tip for the equation and a sphere for the signs of the zodiac. Gilt brass 27"' three quarter plate movement, English lateral lever escapement, cut bimetallic balance, blued steel balance spring with a Phillips terminal curve. The movement is built on four different levels with on one side the perpetual calendar motion work set on a skeletonized plate allowing to see part of the striking train and the minute repeating work; the astronomical indication works and the equation of time kidney cam are set on the reverse of the going train level. Striking and repeating on gongs with "grande/petite sonnerie" and strike/silent selection slides on the band. Push pieces and bolts for the perpetual calendar and the astronomical indication adjustments are set on the band as well. Signed "Dent" on the dial. In very good condition. Diam. 80 mm.
Manufactures